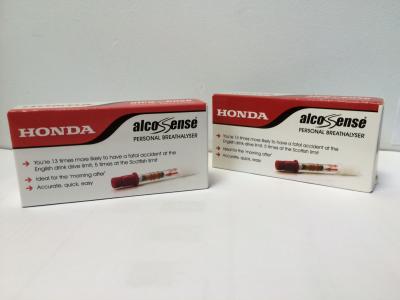 AlcoSense has formed a partnership with Honda (UK) to raise awareness of the dangers of driving the morning after drinking. To publicise the partnership and to ensure safer UK roads before Christmas Honda was giving away AlcoSense Personal Breathalysers free of charge in Honda’s UK dealerships throughout the festive period.

The two companies also commissioned research which was widely reported in the press and on radio into attitudes towards drinking and driving over the festive period. Among the findings were that one in four (27.7%) Christmas party-goers expected to have six or more alcoholic drinks putting them at real risk of being over the limit the following day. Worryingly, more than one in five (21.03%) admitting that they would drive, even if they suspected they were over the drink drive limit.

The partnership between AlcoSense and Honda (UK) will be strengthened in 2016 as the companies work together to find ways to raise awareness of the dangers of drink-driving.