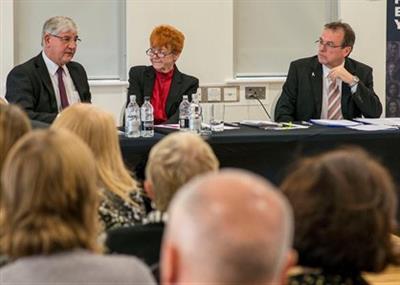 Police and Crime Commissioners in the north of England, responsible for Forces close to the Scottish border, are calling for a lower drink-drive limit in England and Wales.

In a letter to The Times Ron Hogg, of Durham, Vera Baird, of Northumbria, and Barry Coppinger, of Cleveland, argue that the current two-tier system is confusing for drivers and leads to accidents. They want to see the limit in England and Wales brought in line with Scotland. In their letter they state it has been "proven that a lower drink-drive limit significantly improves road safety and reduces drink-drive related deaths".

Scotland reduced its drink-drive limit in December 2014 from the UK 0.08%BAC to 0.05%BAC, which brought it in line with most other European countries. The rest of the UK remains at 0.08%BAC - the joint highest limit in Europe, alongside Malta.

The UK government is under increasing pressure to lower the drink-drive limit although it has ruled out introducing any changes in the short or medium-term.Earlier this month Roads Minister Andrew Jones argued that the existing limit struck a necessary "balance between safety and personal freedom".

With Northern Ireland having already passed legislation to lower its limit in line with Scotland, and the Welsh Assembly having discussed how it might do so, the UK government will continue to be under pressure to do the same for the whole of the UK.