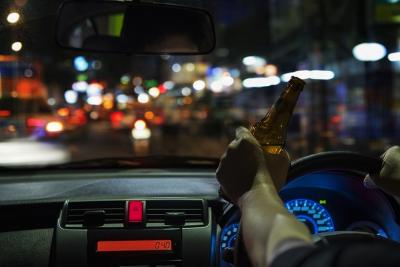 All convicted drink drivers in Northern Ireland will now be automatically referred to a rehabilitation course – to educate them on the potential consequences of their actions.

Those completing the course will see their disqualification period cut by up to 25%.

In a poll conducted by breathalyser firm AlcoSense, over a third of motorists (36%) think their ability to drive is only impaired if they are actually over the legal drink drive limit.

But you are THIRTEEN times more likely to be involved in a fatal crash if you are at, but not over, the limit in Northern Ireland.

Even with 10mg per 100mL of alcohol in your blood (one eighth of the limit) it is 37% more likely than when completely sober, research shows.

“Just a small amount of alcohol slows your reaction time, inhibits judgement and reduces both concentration and co-ordination - increasing the likelihood of an accident,” warns Hunter Abbott, MD of AlcoSense.

“If you drink four pints of medium-strong beer or four large glasses of wine, it can take as long as 14 hours for the alcohol to clear your system - so test your alcohol level the morning after the night before with a personal breathalyser”.

The Alcosense Excel features a smaller version of the same sensor used by several UK Police units for maximum accuracy.

According to PSNI figures 2,722 drink or drug driving offences were committed in the 12 months to 30 April 2021.

Sunday was the day the biggest number of tests were carried out in Northern Ireland, although the highest proportion of failed tests was on a Monday.  The most likely time for motorists to be tested was between 9pm and midnight.